Line weights aren't probably something that you're thinking "wow, won't this be fun and useful to learn!" I mean, rendering has some kind of coolness to it, but line weights, when they're working, totally disappear. When they're not working, or aren't there, that's when things can look pretty amateurish.

So with that in mind, I figured I would cover them next. I do have some requests that I'm going to get to over the next little bit, but this was a biggy for me, and relatively easy to get across, I think, so here goes. 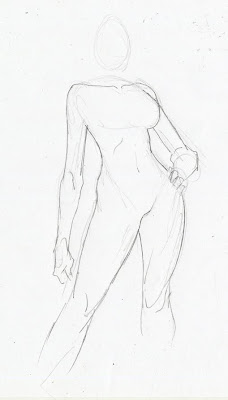 This is a simple figure that I drew with a flat line. There's no weight going on here with the lines at all, and as a result it really lacks a lot of depth. You can go ahead and give me grief about the monkey long arm if you like.... It's a quicky! 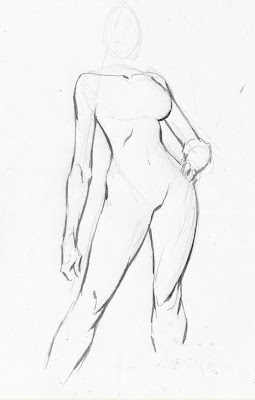 Now here is the same drawing with line weights added. They instantly give the figure some heft, really help show which forms are in front of others, and even give the figure a sense of lighting! Ahem. If I do say so myself....

Now, lots of people think that this is an inking technique, and traditionally that is true, but nowadays pencilers don't leave these sort of things to chance. If you do, you may get lucky and get someone who really knows his stuff, but do you want to be so beholden to a good inker? Besides, more and more pencilers are forgoing inking altogether now. Many publishers may decide it's easier to go with someone who gives them tight enough pencils that they can be tighter with their budget!

Fortunately line weights are easy, easy to figure out how to do properly and consistantly. Honestly...

Here are the rules as I know them to be. And I know that different people do things differently, but hey, if you like how someone else does it then you need to observe their work and learn their rules! Inside curves, undersides, and connecting points should always have a thicker line. This assumes that you have lighting from above. If you have lighting from somewhere else then adjust appropriately. For instance, the top of Captain America's head could even have a broken line...but if you break the line where it connects to the neck, it'll just look flat and lifeless. 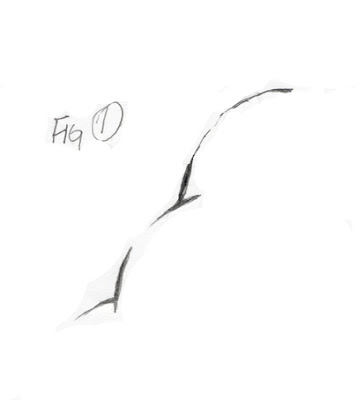 Figure 1 above illustrates this point in very, very simple terms. Where the mounds connect is shored up, but the crests of the mound is broken. The eye completes the line, and the break kind of gives the drawing some air... If you did this the opposite way around you would have something that really doesn't read well. 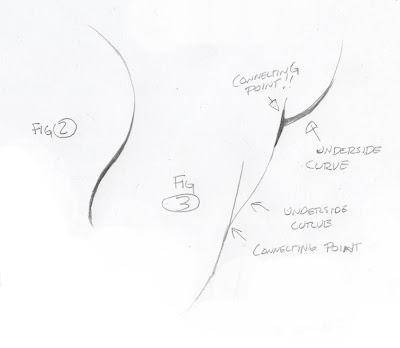 Figure 2 shows an underside curve. As you can see, it curves inside and under, and it would be a natural place for shadowing if the lighting were to come from above, so that's the place that gets the thicker line. Where it curves up toward the light, it thins out, and could even be broken... Frank Miller's work is such a great example of how drawings can hold up without lines where the light is.

Figure 3 shows how an inside curve goes to a connecting point. I finished one and left one so you could see the difference.

Ok. So that's line weights. But there's something else that's very closely related that I feel like I should uh....relate. 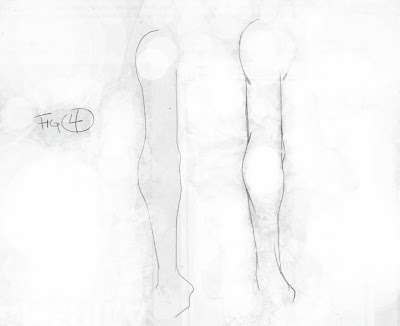 If you can ignore the texture on this picture....I'm almost out of good Marvel paper right now, and even photocopy paper, so I'm using photocopy paper with stuff printed on the other side, and it's showing up on the scanner.... I tried to erase it as best I could, but what do you want? It's free.

So figure four shows two arms. One is a contour line, with no connecting points at all. The second has connecting points where forms overlap. Now, in order to do this, you have to know which forms overlap which, but unless you show that consistantly, it doesn't read. It's very simple, but something I see missing all the time. Broken lines at connections, and overlapping that fights form are major problems in portfolios I see from artists who I know could fix it if they were just aware of the problem. Now take these connecting points in figure four, and throw the line weights on them, and you have a figure that's practically complete! 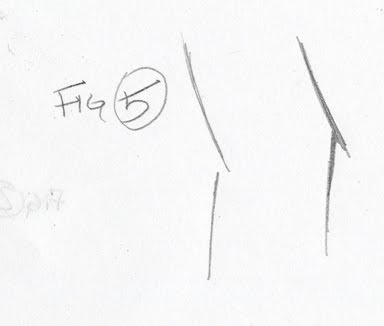 I'm reading this post, and I'm feeling like I'm not as clear as I could be on one point, so here it is. Figure 5 shows a connecting point that's been broken, and one that hasn't. The broken one is really not a connecting point at all, is it? It's just two floating lines! I would challenge you to tell me which one is in front of the other. Now imagine a picture with this problem repeated all over! It's a flat mess. The connecting point that hasn't been broken though is clear and easy to read. The top line is in front of the bottom.
Posted by Dave Finch at 7:30 AM 9 comments: 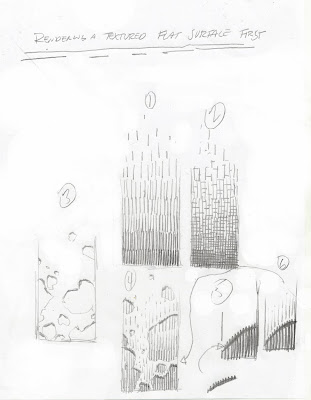 Ok. so I'm helping a friend with some rendering techniques, and I'm breaking it down as I go, so I figured I'd throw what I'm doing up here. Make of it what you will!

#1 This is just a flat gradation from dark to light.
#2 This is a horizontal line drawn over it for a more textured effect.
#3 This is how I block in shapes to create a textured wall. I put some thicker lines on the top of the shapes to make them visually recess. It gives it the look of shadowing. Really, this could be left like this. I just like all the little lines!!
#4 This is the same technique from #1 inside the shapes, outside the shapes is the same technique, but higher on the value scale.
#5 I wanted to isolate the little ridge of rendering that I use to create some dimension. #6, and the line at the bottom further break down the process.

I've got more up my sleeve, and it's fun to break down this stuff. Stay tuned.
Posted by Dave Finch at 10:04 AM 10 comments: